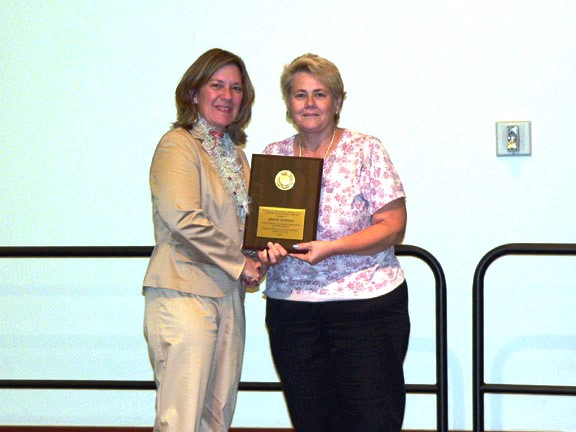 The 2005-2006 recipient of the Arthur Sidney Bedell award is Edie Eldeen, who is employed with the City & County of Honolulu’s Department Environmental Services, Regulatory Control Branch. Edie has been a member of WEF since 1978 and has served previously as HWEA Membership Chair (1990 to 1996) and as HWEA Conference Co-Chair (2006). Prior to moving to Hawaii, Edie was also very active in the Iowa Water Environment Association.

She is a member of the WEF Membership Committee and also a member of the WEF Membership Diamond Club since 1995, sponsoring over 125 new members. She served on the first national Operations Challenge team for Iowa. She has also served as a Operations Challenge laboratory event judge at the WEFTEC held in Kansas City. Edie has also volunteered much of her time to facilitate and promote HWEA and the wastewater treatment field in Hawaii.

Edie has been employed by the City & County of Honolulu since 1988. From 1988 to 1992, she has worked as a Grade IV Operator at the Honouliuli Wastewater Treatment Plant, operating the multiple hearth furnace. From 1992 to 1999, she served as a Supervisor III assigned to the Wahiawa Wastewater Treatment Plant. There, she was not only responsible for the Wahiawa WWTP, but also the Whitmore Village Pretreatment Facility, Mililani Pretreatment Facility and nine employees. Duties included operations and maintenance of the facilities under a State of Hawaii Consent Decree. She also assisted in the pre-construction phase of the plant upgrade, perform public education tours and talks, trained new employees, wrote reports, conducted compliance monitoring, sampling, laboratory testing, procurement of supplies, grounds maintenance, and plant security. During this span of time, the plant received operational compliance awards each year.

Edie’s contributions to HWEA and the water environment field have been considerable and she is always willing to put forth effort to educate people about the field. For these reasons, we congratulate Edie Eldeen as the 2005 – 2006 recipient of the Arthur Sidney Bedell Award.