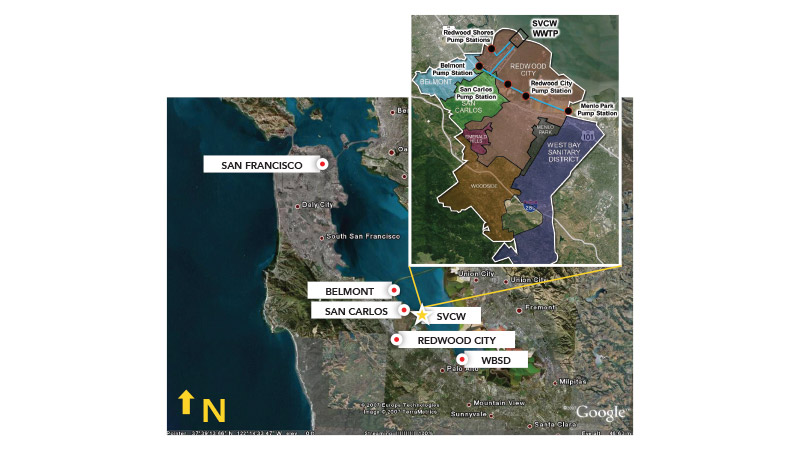 Executive Summary
Following an educational seminar conducted at Silicon Valley Clean Water (SVCW) in September 2013 where the concept of hyperbolic mixing and aeration was first introduced to the plant, SVCW asked MISCOwater to provide an upgrade option for its original aeration system mixing system.

In partnership with MISCOwater and Pacific Gas & Electric (PG&E), SVCW was able to quantify potential savings in energy using a hyperbolic mixer/aerator. Benefits associated with increased process flexibility and reduction in grit accumulation at the basin floor were also examined. Procurement via a unit demonstration effort led to full-scale implementation and while several hurdles arose the project was considered a success. Applying a conservative discount factor SVCW calculated the present value of the energy savings over the lifetime of the new equipment to be over $5 million. SVCW also received $273,623.94 rebate check from PG&E for upgrading the aeration mixer system.

Original Aeration Mixing System
SVCW’s activated sludge aeration system had essentially remained unchanged in the thirty-five years since the construction of the facility in the early 1980’s. The antiquated turbine aerators consisted of a single large air orifice discharging into turbine mixer hoods approximately 54” from the floor of the aeration basins (Figure 3). Each basin was equipped with two identical turbine aeration stations with four aeration basins in total. The original turbine systems were driven by 100 HP motors and large gear drives. While the gear drives had been either replaced or rebuilt over the prior thirty-five years of service, the documented average amp-draw equated to 117 HP each demonstrating a consistent over-drafting of the nameplate amperage.

Technology Evaluation
SVCW evaluated several options for upgrades to the aged and inefficient aeration system. Consideration was given to options including upgrades to fine-bubble diffused air, improved turbine mixers and the INVENT Hyperclassic mixer/aerator. The markedly high cost of a complete upgrade to a fine-bubble diffused air system compared to an innovative mixer/aerator design guided SVCW toward the latter as preliminary return on investment (ROI) options were evaluated. This process led the SVCW Team toward deeper exploration of the INVENT mixer/aerator technology as initially recommended by MISCOwater.

Given the fixed output of the original multi-stage blowers used to supply air to the activated sludge process, SVCW evaluated theoretical performance and actual performance to justify a deeper discharge point for air into the aeration basins. Review of the performance curves for the blowers indicated the deeper discharge depth would put the blowers at the upper end of their capability but within operating range. SVCW staff developed and executed a plan to artificially simulate deeper basins to test the blowers in-situ. This trial proved successful which furthered the concept of the INVENT mixer/aerators.

The INVENT HyperClassic Mixer/Aerator Design
The HyperClassic mixer/aerator is a unique hyperbolic mixing and aeration system that provides excellent mixing and homogenization as well as high oxygen transfer efficiency. The design is a fluid-mechanically optimized system featuring hyperbolic-shaped mixer body that is installed close to the bottom of the tank and a drive mounted on top of the tank above the water level on a bridge or support structure. In the case of SVCW, the existing mechanical mixer support towers were re-used to save on construction costs.

The mixer/aerator (Figure 5) consists of four main components: the drive, the shaft, an air sparger ring, and the hyperbolic mixer-body. The floor-mounted air sparger ring allows for the addition of air directly below the rotating mixer body. The hyperbolic mixer body consists of a fiberglass reinforced disc with stainless steel blades fastened to the bottom to “cut” coarse bubbles into fine bubbles that are accelerated outward from the perimeter of the mixer body into the tank when the mixer body rotates, resulting in fine-bubble aeration.

Because the hyperbolic mixer body draws water downward along the shaft then “pumps” water radially outwards, the system produces a highly turbulent flow along the floor scouring particles and other depositions off the bottom of the tank. The depositions and biomass then rise upward until they are just below the water surface providing a well-mixed and aerated basin.

Pilot Planning & Testing
Armed with the proof-of-concept, SVCW and MISCOwater established a performance-based offering for piloting the mixer/aerator technology. This “Unit Demonstration Agreement” was premised upon installation of two INVENT mixer/aerators in a single basin to be run for an agreed upon time frame, with all costs of material and labor borne by MISCOwater. Performance was to be confirmed using in-situ oxygen transfer testing, and established testing points were developed for performance accountability. Pilot testing was to be completed without speed control (no VFDs) as a lower cost option. Fixed speed operation allowed SVCW and MISCOwater to have a reasonable exit strategy in the event that piloting did not prove successful.

By mid-2015 installation of the mixer-aerators wiring and controls was completed. In late 2015 clean water oxygen transfer testing was performed via Standard Oxygen Transfer Rate (SOTR) analysis performed by ATC, S.A. SOTR analysis was performed in triplicate with an average result of 21.74% oxygen transfer efficiency and a capacity of 383 lbs O2/hour (Figure 6). Testing confirmed that the performance criteria agreed upon in the Unit Demonstration Agreement was met to the satisfaction SVCW.

Full-scale Implementation
Following the successful demonstration test (Figure 7), VFD’s were installed. In theory, VFD’s allowed speed reductions from full 60Hz speed to lower speeds which when coupled with lower air demand would reduce energy consumption. Upon completion of the demonstration, the equipment was placed in continuous operation and performed well with the exception of an out-of-service condition resulting from a drive and gearbox failure, which was covered under the manufacturer’s warranty.

Equipment Challenges
As noted above, the initial units installed were continually operated to assure SVCW that all performance criteria would be met. In September 2016, one of the two demonstration gear-motor assemblies experienced a failure. This failure led to a revisiting of the gear ratios, input horsepower, and torque loads by SEW Eurodrive. The outcome of the failure analysis revealed that three-stage gear-motors would be a more appropriate selection than the two-stage gear-motors originally provided, given the applied torques and rotations. Additionally, SEW determined that 60HP motors would be required for the new three-stage gear-motor assemblies. MISCOwater worked with SEW Eurodrive and INVENT to present a solution that would provide replacement gear-motor assemblies at no additional cost to SVCW.

Performance Results
Following installation of the replacement gear-motor assemblies, SVCW continued to operate the demonstration units to ensure adequate performance and that all equipment performed reliably and as expected.

In December 2016, SVCW engaged MISCO to purchase and install INVENT mixer/aerators in the balance of the aeration basins. Continued operation demonstrated improved mixing performance at reduced horsepower. An increase in MLSS of 50-100 mg/L was measured in aeration basins containing the new hyperbolic mixer/aerators providing evidence of improved mixing compared to basins still containing the original turbines.

One aspect of the demonstration project that was not easily quantifiable was the correlation of mixer speed to electrical efficiency. In theory, there is a correlation between the airflow to each mixer/aerator and the optimum rotational speed of the mixer in order to achieve even higher efficiency. SVCW concluded that to a degree this was true, however, due to the existing columns inside the basins, the theoretical curves could not be applied in this case.

While it would be preferred to directly correlate mixer speed with the air flow (scfm), this did not seem easy at this installation. Though, at full speed operation, the INVENT mixer/aerator installation still represented a dramatic reduction in electricity consumption within the SVCW activated sludge process.

PG&E Incentive
SVCW began discussing energy efficiency projects with PG&E in early 2015. At this time, upgrading the aeration system with new mechanical aerators was discussed, and PG&E worked with SVCW to establish the criteria for potential energy rebates that would result from installing more efficient aeration process equipment. In August 2016, PG&E met with SVCW to discuss the results of MISCOwater’s P3 Furnish-and-Install demonstration. SVCW decided to implement the Energy Efficient Measure (EEM).

The energy savings calculations were done using a custom spreadsheet analysis. The calculations were based on the difference between the secondary treatment energy with the old and new mixer power draws. PG&E established the baseline power draw of the aerators was 117 HP based on average measured current draw of 121 Amps over four-week period and spot measurements of 470 Volts and 0.89 Power Factor. The metered data was normalized to account for annual operating conditions. The baseline power draw of the aerator motors was higher than the rated horsepower (100 HP) of the electric motors.

Following the four (4) weeks of data collection the energy savings were normalized at a realized annual electrical energy reduction of 2,954,024 kWh and a peak demand reduction of 248.7 kW.

Energy savings analysis considered both the power-draw from the mixer motors and the blowers. The pre-installation electrical energy savings were approved at an estimated 2,967,262.5 kWh per year, representing approximately 25% of SVCW’s total annual electrical energy usage (kilowatt-hours) and over 50% of the energy purchased from PG&E. SVCW received a $273,923.94 rebate from PG&E for upgrading the aeration mixer system.

Summary
By partnering with a solutions-provider like MISCOwater and a forward-thinking utility such as PG&E, SVCW was able to successfully complete this energy-savings aeration upgrade project. SVCW’s electrical savings and PG&E rebate attest to the fact that sometimes making small bubbles can make your agency BIG money.

For questions regarding PG&E’s Energy Efficiency Programs, please call your PG&E representative at 1-800-468-4743. You can also email the Business Customer Service Center at businesscustomerhelp@pge.com. 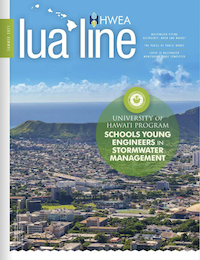