Controlling the Power of Water 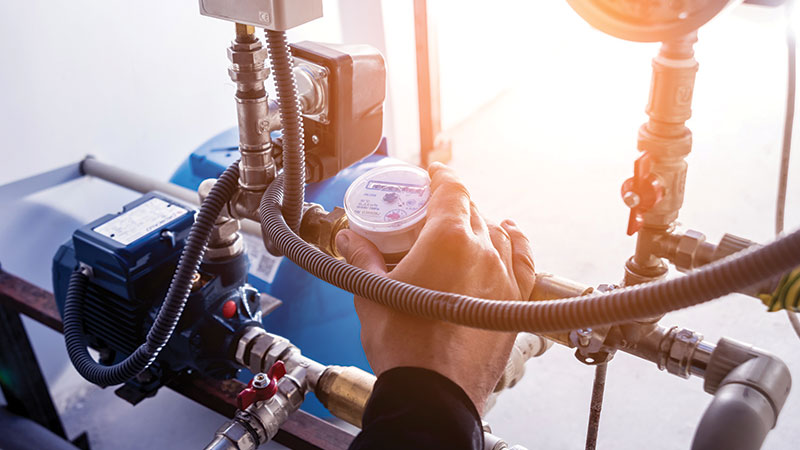 A Look into Valve Selection
By Travis Junker, PE (GHD)

The importance of valve selection and placement is essential for the proper design and operation of water and wastewater systems. Given the prevalence of valves in our daily lives it is well understood that valves can turn flow on and off, or control the rate of flow.

While these functions are alike in the water and wastewater industry, there are other less intuitive applications for valves that are critical in providing system protection and control. The information herein is geared towards young professionals as an introduction to the concepts and basic rationality of valve selection and placement. To remain steadfast to this intent, descriptions of valve mechanics are stated briefly, while their effects on key equipment and the overall system are described in earnest.

The Power of Water

It is common to underestimate the power of water. Despite public education on the dangers of floods, many drivers still become stranded while attempting to cross flooded streets. A poignant example of the unintentional consequences of water mismanagement is shown in Providence Canyon State Park, GA, where poor farming practices caused excess stormwater to scour a manmade canyon. Even in the water and wastewater industry, it is easy to underestimate the power of water since the fluid movement is typically concealed within stationary pipes. However, it is well known that water is dense and has considerable momentum when in motion. A rapid change in fluid velocity, that can be initiated by closing a valve or starting a pump, can create destructive forces with the potential to damage infrastructure or create unsafe conditions. These forces are commonly known as surge or water hammer.

The generation of these forces is exemplified in the following narrative. If a steady flow of water is interrupted by the instantaneous closing of a valve, the advancing water molecules will abruptly “crash” into the valve disk as they slow to zero velocity. The upstream molecules will continue to collide into one another along the length of the pipe, creating a pressure wave that travels upstream from the point of origin at the speed of sound until the wave reaches a reservoir or other hydraulic break in the system. The pressure wave then reflects towards the valve, followed by a downsurge equal in magnitude to the original wave. This cycle can be visualized by analyzing the effects of releasing a compressed spring. The spring will not simply expand back to its original shape but will stretch beyond its original shape into a state of tension. This cycle between upsurges and downsurges will continue until friction dissipates the wave energy.

As previously stated, anything that rapidly changes the velocity of water can cause surges. Another common source of surge is from the startup and shutdown of pumps. This is mostly a concern with constant speed pumps and is not critical for soft starters or variable frequency drives, which can slowly speed up or turn down over multiple critical periods. A surge control valve is required on the discharge of constant speed pumps to prevent surge waves. During startup, the pump is started against a closed valve until a setpoint pressure is reached in the downstream pipe. The valve introduces flow into the system slowly over multiple critical periods. During shutdown, the valve is slowly closed over multiple critical periods against a running pump. Only when the valve is nearly shut does the pump turn off. All pumps regardless of drive type can experience surge waves during an unplanned shutdown or power failure. Other valve types, as described subsequently, can be used to protect key equipment and relieve surge waves during unplanned shutdowns.

While numerous check valve designs are available for specific applications, their main function is to only allow flow to travel in one direction. They are commonly installed on the discharge of pumps to prevent reverse flow when the pumps are turned off. A secondary benefit is their ability to prevent surges from damaging pumps. This can be visualized by studying how a typical swinging disk check valve operates when installed on a pump’s discharge. When flow is travelling in the intended direction, the water pressure forces the disk to swing outwards away from the seat to allow forward flow. If flow tries to travel in the reverse direction, the water pressure forces the disk closed against the seat preventing reserve flow. If a power outage or equipment failure causes the pump to turn off, a surge wave will travel downstream to the end of the system and reflect back to the pump. The check valve will react to the greater downstream pressure by closing, preventing the surge wave from damage to the pump. If the disk has not fully shut when the surge wave returns, the disk may slam violently against the seat, which can damage the check valve. To prevent this occurrence, many swinging check valves are installed with an adjustable weighted lever or spring to guarantee the valve is shut when a surge wave returns. They can be coupled with a cushion, which protects the valve if slamming occurs. While check valves prevent surge waves from damaging pumps, they do not stop surges from occurring or damaging other parts of the system.

Common valves classified for isolation include butterfly valves, gate valves, eccentric plug valves, and ball valves. Isolation valves are intended to operate fully open or fully closed for the purposes of equipment/instrument isolation or to isolate whole processes. Many of these valves are quarter turn, meaning they can be fully opened or closed with one quarter turn of the actuator. There are several reasons why one valve type may be more favorable for a given application than another. Butterfly valves are thin, lightweight, have low head loss, and are comparatively less expensive in larger pipe sizes. However, the stem is exposed to the line media and can accumulate rags and debris. For this reason, butterfly valves are typically used for clean water or air/gas service and not wastewater. Gate valves are thin, provide an unobstructed flow path, have low head loss, can pass pigging equipment, and are comparatively less expensive in small sizes. However, they are multi-turn actuated and therefore are more difficult to open and close. Gate valves are usually installed in locations where actuation is not required regularly. Eccentric plug valves provide an unobstructed flow path, have low head loss, can pass pigging equipment, do not expose the operating mechanism to line media, have excellent bubble tight shut-off in wastewater, and are comparatively less expensive in larger sizes. Plug valves are typically installed for wastewater service where isolation is critical. Ball valves provide many of the benefits as plug valves but are not as common in critical wastewater application. However, ball valves are versatile and are common in water and chemical feed lines.

Common valves classified for throttling include globe valves, needle valves, diaphragm valves, and butterfly valves. Throttling service valves are intended to operate partially open and fluctuate readily to control system flow. Globe valves provide bubble tight shut-off, can operate frequently, and provide precise metering. The abrupt changes in flow path create medium to high head loss and are normally used for clean fluids. Needle valves are similar to globe valves except the plug is a small, tapered cone that is exclusively intended for low flow applications. Diaphragm valves are excellent for wastewater and slurry services, provide an unobstructed flow path, have low to medium head loss, and ensure the operating mechanism is not exposed to line media. However, they should only be used for low pressure applications and the diaphragm can erode quickly. Butterfly valves have the same characteristics described in the isolation valve section. Moreover, they provide low head loss, can handle high temperatures and pressures and are common with throttling air/gas services.

Air in water and wastewater systems can be beneficial or detrimental depending on the situation. Automatic air valves can provide air release, air admittance, or both to correct varying situations. Some reasons why one valve type may be more favorable for a given application are as follows. Air collects at the high points in piping systems and can reduce capacity, increase pumping power, and contribute to surges. Air release valves are placed at high points to release air during initial filling and during pressurized operation. Vacuum pressure can damage pipes and prevent proper system drainage. Vacuum breaker valves are placed at high points and other critical locations to allow air into the pipe while draining or during upset conditions such as a surge wave. Combination valves perform both functions by admitting air during draining and upset conditions and expel air during filling and normal operation. When selecting an automatic air valve, it is important to know the intended process operation. For instance, some applications require the system to operate in vacuum, so an air release only valve is appropriate.

Automatic air valves are another technique to mitigate surges in water and wastewater systems. As previously stated, pressure relief valves can only equalize upsurges. Whereas automatic air valves can rapidly admit air into the system to neutralize a downsurge. The admitted air is slowly bled out of the system to prevent the separated water columns from slamming
back together.