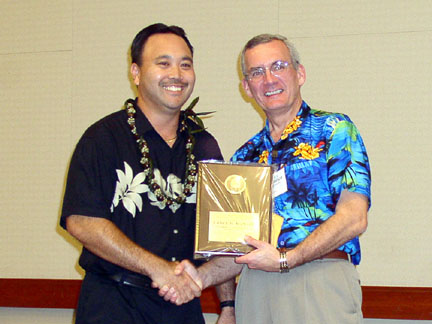 The 2002-2003 recipient of the Arthur Sidney Bedell award is Lance H. Manabe, who is currently a Project Engineer with the local consulting engineering firm Fukunaga & Associates, Inc.

Lance was born in Honolulu and graduated from Kailua High School in 1981. After high school, Lance attended the University of Hawai’i at Manoa, where he earned a Bachelor of Science degree in Civil Engineering in 1988. He began his engineering career as a Civil Engineer for Wilson Okamoto, where he was employed from 1988 to 1989. Since then he has also worked at the City & County of Honolulu and local consulting engineering company Engineering Concepts, Inc. Lance earned his Professional Engineer’s license in 1994.

Lance has been an active member of HWEA for several years. His service to the Association includes:

Lance received HWEA Service Awards in 1996-1997 and 2000-2001 for his continued involvement in HWEA. He was responsible for creating several of the T-shirt designs for our HWEA annual conferences. In 1995, his design received recognition from WEF for Member Association Best T-Shirt. In 2001, as a member of the Collection System Committee, he helped organize the first biennial collection system workshop. He has currently agreed to manage the Association’s Select Society of Sanitary Sludge Shovelers (5-S Chapter). He plans to re-energize this group by involving them in fundraising activities for the association.

Lance and his wife of eleven years, Dee, reside in Kaneohe. In addition to his role as a Civil Engineer, Lance has also been described as a Baker, Wedding Planner, and Game Master. If there is a social function in need of games, Lance is always there to provide the fun. Outside of the office, Lance is also an avid sports fan. His favorite sports are tennis, golf, and volleyball. He just loves anything to do with having fun.
Lance’s contributions to HWEA over the past years have been considerable and he brings a tremendous amount of energy and enthusiasm to the association. For these reasons, Lance is truly deserving of the WEF Bedell Award. Lance received his award from 2002 WEF President-Elect Larry Jaworski.