The 2003 – 2004 recipient of the WEF Arthur Sidney Bedell Award is Kenneth T. Ishizaki, Vice President of the consulting engineering company Engineering Concepts, Inc. Ken joined the Hawaii Water Pollution Control Association (HWPCA) in 1968, just six years after its founding. If you asked him why he joined the HWPCA, his answer will be that as one of the very few students enrolled in the University of Hawaii sanitary engineering graduate school program, it was bestowed upon the students as a perk. In those early days when slide rules ruled and handheld calculators were still a distant dream, very few civil engineering graduates enlisted in the master’s degree program of this particular specialty field. Since then, Ken has been a mainstay of the association, experiencing the name change of the organization to the present Hawaii Water Environment Association (HWEA) and the profound growth of the organization’s membership. He served the association as HWPCA Secretary-Treasurer in 1974, and in ensuing years went on to serve as Vice-President, President and finally Past-President in 1978. Of the distinguished 73 sanitary professionals in Hawaii who hold the coveted Select Society of Sanitary Sludge Shovelers (5-S) keepsake that recognizes service to the organization and the community, Ken is chronologically numbered as the fourteenth inductee, which took place in 1983.

Ken has continued to be active in the association and the water environment field. He has served on the State of Hawaii Board of Certification of Operating Personnel in Wastewater Treatment Facilities. Most notably, he has been a member on the HWEA Water Reuse Committee since it was formed in the early 1990s. Throughout the years, this committee has served as an advisory body to the Hawaii State Department of Health (SDOH), with an aim to promulgate practical standards for the recycling of treated wastewater for beneficial purposes in Hawaii.  In its most recent revisions to its Reuse Guidelines, the SDOH relaxed some of their requirements, finally recognizing the position that the Reuse Committee has long advocated – reuse of wastewater, done properly, is a safe and beneficial practice. Currently, Ken is serving as HWEA’s National Director on the Water Environment Federation (WEF) House of Delegates for the 2002 to 2004 term.

Ken’s contributions to HWEA and the environmental profession has been considerable during his more than 38 years as a consulting engineer. For his spirited and sustained service to the organization, we congratulate Kenneth T. Ishizaki as the 2003 – 2004 recipient of the WEF Arthur Sidney Bedell Award.  You can click here or on the thumbnail image above to view Ken accepting his award from WEF Past-President Robert McMillan. 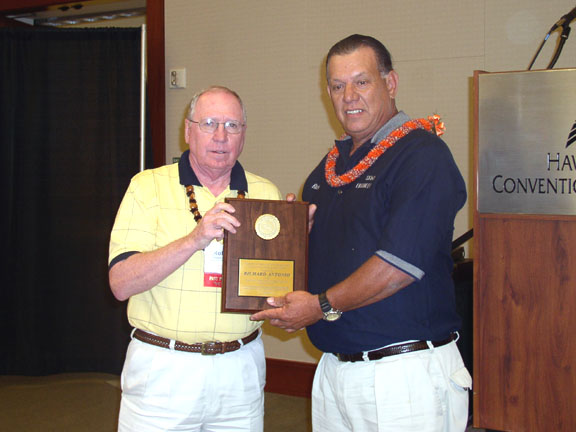 The Hatfield Award is presented to operators of wastewater treatment plants for outstanding performance and professionalism. Criteria for this award include: 1) preparation of reports that fulfill the information requirements of his or her superiors and provide useful suggestions for facility and operational improvements; 2) promotion of good public relations with the community; and 3) involvement in dissemination of information concerning advancements in the field.

In his role as Plant Manager, Richard is constantly in contact with the public, homeowners, contractors, hotel employees, hotel guests and government officials. His role is to ensure that not only all regulatory requirements are met but also that the company’s relationship with the various parties are kept in good standing. His knowledge of the industry and it’s relationships with the public sector are well understood and he has always been very supportive and helpful in his approach with the public.

Richard is meticulous in his documentation of what occurs in his facility, which includes the collection system and pump stations. He has a wealth of information (both documented and anecdotal knowledge) of the initial construction and progress of the wastewater infrastructure that is invaluable in providing information for improvements to the existing system as well as having a tremendous grasp of ways to improve the system. Richard is constantly looking for ways to improve the performance of the systems in a cost-efficient manner.

Richard is a Grade 2 Operator and supervises 3 employees who are extremely effective in maintaining and operating their wastewater system. His management skills are exceptional and are evident in the respect that his team gives him and the operation and overall condition of the facility. As a manager, implementation through subordinates and managing them as a team is the key to long-term and lasting success.

Richard’s strength lies in his ability to successfully go from the nuts and bolts of running a treatment facility to managing a staff that runs the facility. He has outfitted the South Kohala Wastewater System with a team of journey level people, including a journeyman electrician, plumber, welder, and a certified mechanic. With this team, he is able to deal with 90% of all work in-house, which is very cost-effective. He is very effective in matching the skills and strengths of the person to the job. He is also very committed to providing his team the flexibility to solve problems as a team and supporting that approach.

Throughout his career, Richard has always exemplified the true meaning of a Professional Wastewater Operator, and for this we congratulate Richard Antonio as the 2003 – 2004 recipient of the WEF William F. Hatfield Award.  You can click here or on the thumbnail image above to see Richard accepting his award from WEF Past-President Robert McMillan.

The Laboratory Analyst Excellence Award recognizes individuals for outstanding performance, professionalism, and contributions to the water quality analysis profession. Criteria for this award include: 1) employment involving direct analytical responsibilities at an educational, industrial, commercial, or municipal laboratory which performs

wastewater related analysis 2) involvement in WEF/HWEA and other professional organizations; 3) outstanding efforts in the area of wastewater and environmental aquatic analyses; 4) involvement in community activities and public relations; 5) presentations at professional conferences, meetings, etc. relevant to water quality analysis; 6) professional certifications; 7) continuing education; 8) contributions beneficial to the nominee’s facility; and 9) unusual initiative or performance “beyond the call of duty.”

Terrence has served as an instructor for the State Training Center, teaching beginning and advanced level laboratory courses. He has provided valuable input for a comprehensive Facility Evaluation for the Hilo Wastewater Treatment Plant, including plant optimization and sulfide testing within the collection system.

He is dedicated to his profession, exemplified by his efforts to work on holidays, days off, and during emergency spills for the DOH. Terrence is the only person who does the NPDES compliance reporting for three Hilo Wastewater Treatment Plants, and operates the process control lab for two of the plants. He has continually educated the wastewater plant operators whenever they have had questions.