This is a sample module published to the sidebar_bottom position, using the -sidebar module class suffix. There is also a sidebar_top position below the search.
Winter 2020

For decades, wastewater treatment plant personnel have performed insulation resistance tests with handheld megohmmeters to prevent motor failures that could lead to reduced capacity, costly re-winding repairs and even unplanned shutdowns. However, these tests only provide a “snapshot” of motor health. In a matter of only a few days, motor windings and cables that are exposed to moisture, chemicals, contaminants or vibration can become compromised and fail at startup.

Portable megohmmeters also require electrical technicians to manually disconnect the equipment cables and connect the test leads on potentially energized or damaged equipment to perform the manual testing. These tests expose technicians to potential arc flashes when they access the cabinet. In the United States non-fatal arc flash incidents occur approximately 5 to 10 times per day, with fatalities at the rate of approximately one per day.

With so much at risk, wastewater treatment plant managers are recognizing the value of continuous megohm testing and monitoring of insulation resistance that initiates the moment the motor is off until it is re-started again. Armed with this real-time information, maintenance personnel are able to take corrective actions ahead of time to avoid a failure that would interrupt or reduce plant capacity. By doing so, they can improve service and save wastewater treatment plants potentially hundreds of thousands of dollars in repair fees for expensive rewinding over the life of the plant. Furthermore, permanently installed automatic testing devices allow for “hands-off” monitoring without having to access cabinets – keeping technicians out of harm’s way.

Motor Protection
at Wastewater Treatment Plants
Wastewater treatment plants rely heavily on motors, though the number and type vary depending on the size of the facility and type of wastewater treated. Critical motors are essentially those that could significantly impair the ability to safely meet service objectives or affect water treatment quality levels if unexpectedly offline. Such motors can range from raw influent pumps and aeration blowers to various process pumps and final pumps. The motors can be 100 HP or more, as is the case with some aeration blowers.

In Wisconsin, for example, the City of Oconomowoc’s Wastewater Treatment Facility utilizes a number of critical motors. As a basic activated sludge wastewater treatment plant, it treats about 2.8 million gallons of wastewater per day before discharging it into the Oconomowoc River according to Tom Dickson, the plant’s Operations Foreman. “Some of the critical motors include raw influent pumps that move incoming water to the highest point at the plant before gravity-fed systems take over; along with dry pit submersible pumps, aeration blowers and other motor-driven equipment,” says Dickson.

To protect these motors, most wastewater treatment plants conduct time-based preventative maintenance (PM) programs that include insulation resistance tests several times a year. Based on these tests, motors may be scheduled to be sent out to repair shops for reconditioning. However, the Oconomowoc wastewater treatment facility alternates between two redundant systems that get roughly equal time, so critical motors could be tested while off line. Still, testing with handheld megohmmeters was infrequent.

Given the humid environment, this proved insufficient when a motor that was called on during a slight pressure drop failed on start-up. “Wastewater treatment pumps are exposed to a really wet, moist environment and the motors can burn up if they start up wet, which is costly,” says Dickson. “Rewinding or replacing the raw pumps, for instance, would probably cost over $50,000 each.” As a solution, the wastewater plant implemented heaters in critical motor windings to keep them dry, as well as a continuous testing and monitoring device, called Meg-Alert. The testing device is permanently installed inside the high voltage compartment of the MCC or switchgear and directly connects to the motor or generator windings. The unit senses when the motor or generator is offline and then performs a continuous dielectric test on the winding insulation until the equipment is re-started.

The unit functions by applying a non-destructive, current limited, DC test voltage to the phase windings and then safely measures any leakage current through the insulation back to ground. The system uses DC test voltage levels of 500, 1,000, 2,500 or 5,000 volts that meet the IEEE, ABS, ANSI/NETA and ASTM International standards for proper testing voltage based on the operating voltage of the equipment.
The test does not cause any deterioration of the insulation and includes current limiting technology that protects personnel. “The Meg-Alert equipment tests continuously whenever the motor is off, so you are going to catch a problem like excess moisture or a breakdown of the windings before a critical motor burns up,” says Dickson.

Most motors utilize heaters to maintain the temperature inside the motor so it does not vary drastically from operating temperature or ambient temperatures outside the unit. If it
goes below the dew point, the motor will start picking up condensation while offline.

However, if these heaters fail to operate properly or the circuit breaker is tripped, plant personnel may not be aware of it until the motor fails on startup. Although these motor heaters are checked regularly, this can leave critical motors unprotected for weeks or even months.

Fortunately, continuous monitoring and real-time information from the Meg-Alert equipment can also show if the heaters used to maintain thermal temperatures and prevent condensation are properly working. If not, maintenance personnel can take corrective actions ahead of time to avoid critical motor failures and interrupted production.

Dickson notes that, at his wastewater treatment facility the Meg-Alert device is hooked to the critical motor starter and will prevent the motor from starting if there is a serious problem. “We have it set up to continuously test critical motors that are not running,” he says. “We are constantly testing windings for breakdown and failure.” He points out two notable examples of success. “We found out that a motor was wet inside and a winding heater had failed when the Meg-Alert alarmed and prevented the motor from running,” says Dickson. “Another time the device stopped a motor from starting when a wire had rubbed through, which prevented a short to ground failure.”

Preventing Arc Flashes
According to Dickson, enhancing employee safety and preventing potential harm from arc flash was another key factor behind the decision to install the continuous insulation resistance testing and monitoring devices. 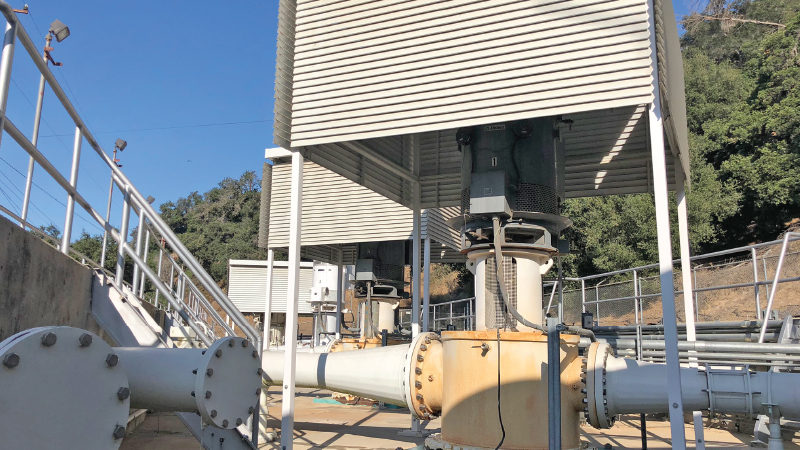 Arc flashes are an undesired electric discharge that travels through the air between conductors or from a conductor to a ground. The flash is immediate and can produce temperatures four times those at the surface of the sun. The intense heat also causes a sudden expansion of air, which results in a blast wave that can throw workers across rooms and knock them off ladders. Potential results of an arc flash include third degree burns, blindness, hearing loss, nerve damage, cardiac arrest and death.

Probable causes of an arc flash
listed by NFPA 70E include “improper use of test equipment.” Although de-energizing equipment before testing and wearing appropriate personal protective equipment (PPE) is recommended, the best solution is to eliminate the need to access control cabinets to perform insulation resistance tests. “We have a licensed electrician and staff who are arc flash trained, but you can never be too careful with arc flash,” says Dickson. “So, having a device that makes manual testing unnecessary only makes operation and maintenance that much safer.”