This is a sample module published to the sidebar_bottom position, using the -sidebar module class suffix. There is also a sidebar_top position below the search.
Fall 2018 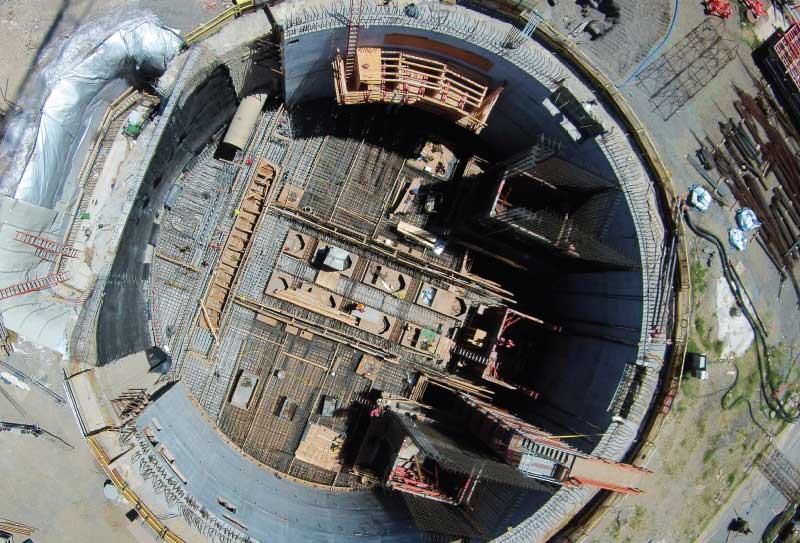 The Kailua Regional Wastewater Treatment Plant provides preliminary, primary, and secondary treatment. It was built in 1965 to serve the town of Kailua and the surrounding communities.

In 1994, water resource recovery facilities (WRRFs) in nearby Ahuimanu and Kaneohe were converted to preliminary treatment facilities and the Kailua facility was expanded to handle flows from these areas. 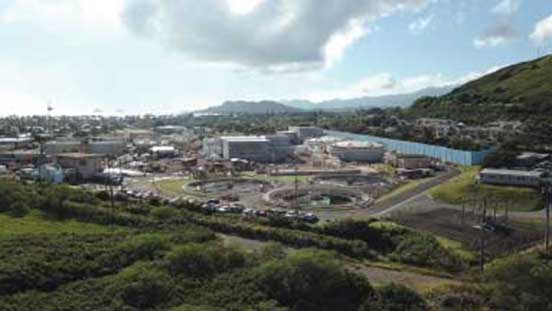 “This first-of-its-kind project in Hawaii is one the entire community can be proud of,” said Honolulu Mayor Kirk Caldwell. “Our team has created a world-class sanitation facility that will last for generations, while also protecting the environment that’s so important to our island lifestyle. 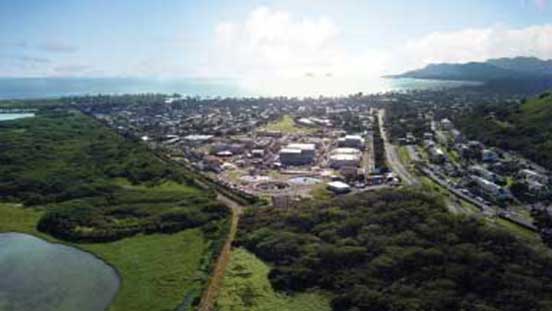 Homes and an elementary school neighbor the facility. The project involved extensive community outreach that began during the planning stages. Early input from residents helped the city revise the initial tunnel alignment to address concerns raised and stay on schedule.

To minimize construction concerns, the project team implemented a noise and vibration monitoring program, a 24-hour phone hotline, a screening wall, and a project website to provide updates. Long-term facility considerations included an enclosed, sound-attenuated, and odor-controlled headworks facility to minimize effects on the neighboring properties.

The project, which included three construction phases, was completed within budget and on schedule to meet the consent decree. It has reduced energy consumption and helps protect the environment. Watch a video that describes the project at goo.gl/9H41LG.

The City and County of Honolulu (CCH) has collaborated with a multi-consultant team for a complex $371M multi-phased project that conveys wastewater flows from Kaneohe to Kailua Regional Wastewater Treatment Plant (KRWWTP). The KRWWTP was recently featured in the Water Environment Technology (WET) magazine. In addition, we interviewed the plant superintendent, Mr. Harry Hauck and included additional details from Brown & Caldwell staff.

Harry Hauck started with the City in 1983 with CSM and joined Treatment and Disposal (T&D) in 1988 at the Aliamanu Wastewater Treatment Plant (WWTP) which was a rapid block activated sludge plant with aerobic digestion. He then moved to the KRWWTP and Kaneohe Treatment Facility in 1994, which both had trickling filters (TF) and anaerobic digestion. At Kailua he received training from GMP on how to run the City’s first new TF/Solids-Contact process. He has been at KRWWTP ever since and has observed many changes over the past few years.

Located next to a school and across from townhouses, the KRWWTP had frequent odor and noise complaints. Complaints would be received every week, sometimes every day. In 2014, new, higher-capacity odor control biotowers were placed in service with the assistance of the designer, Brown & Caldwell and odor complaints decreased to once or twice per YEAR. This huge improvement has changed public perception of the treatment plant from being a scrutinized nuisance to becoming an asset to the community. The KRWWTP staff is now able to focus on operations and maintenance (O&M). With the completion of the tunnel and TIPS project this number is anticipated to decease even further. The project improves environmental protection by conveying wastewater via a tunnel, which is more reliable than a force main. The new gravity tunnel system promotes improved odor management and has a significantly higher flow capacity. The project also allows the elimination of a number of upstream pump stations that were overflow points into the community. The tunnel holds 9 million gallons of storm-generated wastewater flows and diverts into the tunnel influent pump station (TIPS) at KRWWTP. The TIPS features six pumps (45 mgd total rated capacity) in dual wetwells and dual drywells for flood protection to improve reliability. Each wetwell is compliant with Hydraulic Institute guidelines to optimize hydraulic characteristics for the pumps. Each drywell contains three vertical non-clog pumps with motors located on the floor above. The new pumping facility also has an accessible trench-style wetwell with three submersible pumps (15 mgd total rated capacity) located 50 feet above the invert of the tunnel to convey flows from the Kailua basin to the new Headworks. With a total of 9 pumps, the facility has redundancy to ensure protection of public health.

Harry stated that the recent upgrades for this project was an unqualified success. He went on to explain that the designers and contractors including Wilson Okamoto Corporation, Brown and Caldwell, Bowers and Kubota and Hensel Phelps and their subcontractors did a great job right from the beginning. The team listened to the operator’s issues with the plant and included solutions in their designs. Massive and effective public outreach efforts were conducted up front and all throughout the project which resulted in minimal complaints. Regular communication and explanations of schedules, activities, and disruptions with operations staff all through the project kept everyone on the same page. The level of communication and coordination surpassed anything Harry has seen before and should be a model for future projects. The designer on the project agreed, “the Kaneohe-Kailua Tunnel and TIPS project set a precedent for innovation and collaboration for City wastewater projects,” said Brown and Caldwell’s Project Manager, Garrett Leong. “We would like to recognize the City and County of Honolulu for their commitment to innovative projects to strengthen our wastewater system, improve public health, and protect the environment. Brown and Caldwell is proud to be a part of this unique project that will enhance our community today, and well into the future.”

Harry’s credits the successful operation of the plant to the efforts of the whole team at Kailua which includes: Mark Nagiri, TA Assistant Regional Superintendent; Victor Peltier, TA District Superintendent; Chuck Sermersheim, Maintenance Superintendent; his four shift supervisors, Ken Dao, Dennis Venturini, Larry Valari, and Dustin Klute; and the rest of the plant operators and maintenance personnel, including the Collection System Maintenance Division (CSM). Harry leads by example and trains his people by explaining how he does a job/duty and why. He tells them that “when in doubt, ask for help, there are no penalties for asking.” He reminds operators to “always be aware of what is going on and how things are working, so that [the treatment plant doesn’t get] violations.”
Regarding future issues for the plant and the industry in general, Harry notes the importance of designers considering O&M needs, the increased skills needed by operators due to automation (operating/programming PLCs), future effects of sea level rise on the collection system, recycling of water and sludge, future reductions in nutrient discharge limits, reducing energy use and carbon footprint, the need for a proactive recruiting program and good training programs for new operators to pass these facilities on to. 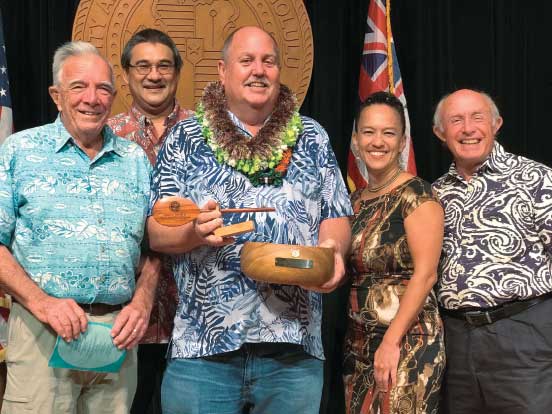 Recently, Harry Hauck was recognized as the 2018 Employee of the Year for the ENV Division at the annual awards ceremony. At the ceremony, top employees from the other 26 divisions were also recognized. After much anticipation it was announced that Harry received the distinguished award of the 2018 overall City and County of Honolulu Employee of the year. Congratulations to Harry Hauck on this great honor! And congratulations on the success of the KK Tunnel and TIPS upgrade project!

Note after article: Harry received
his Grade 4 license in 1994 and is currently the Plant Superintendent.
He acknowledges Wayne Salas as a key mentor on the operations side and Ross Tanimoto and Lori Kahikina on the management aspects of his job. On a personal note, Harry grew up in various places, including Las Vegas where he started high school and the Marshall Islands on Kwajalein atoll where
he finished high school. Harry
has 4 children (2 boys and 2 girls)
and 12 grandchildren.